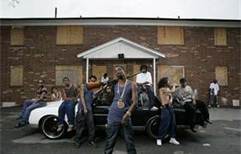 The peril times of today have made life an adventurous journey of successful failure. What I mean by that is many have lived their lives based upon certain past successes only to see that success begin to crumple. It crumples in the effect of failed businesses, material items purchased that are now unaffordable and many other things that come into play during an economic downfall.

It is these very times when many begin to embrace one of two ethics: God or the gun. It would be my hope that many more if not all would embrace God but I am not naive to the fact that crime has it rewards. Though I may never indulge in such acts, crime for some is a viable way of living. I had a chance to watch this movie/documentary called, Snow on the Bluff, which highlighted the life of a young drug dealer in Atlanta. He steals a camera from a group of kids and proceeds to film himself during many other crimes through the Bluff (Better Leave u F—— Fool). But during one scene you get the opportunity to see this young brother engaged in his own personal justification for selling drugs. He recants that selling drugs has not been as bad as some have made it out to be. For him he sees how drugs put food on his table many nights in order for him to eat when his parents could not find work. He shares how selling drugs has provided food for his children as well.

It is during such times that you have to take heed not to condemn folks without proper researching of their situation.  Hard times will voluntarily force you to make decision that you would not otherwise make. Unless you have endured such hard times it is unfair and unjust to assume that you have the answer for their predicament. Yes, the committing of a crime is wrong but not all people who commit crime are doing it just for the sake of establishing a name for themselves. Environment produces characteristics in people that are conducive for survival in that context. The key is that many have not mastered the art of translating those survival skills into entrepreneurial endeavors that are legal and healthy.

What the young people display in Snow on the Bluff is a real world look at poverty in America. Not the glitz and glam of drug dealing but the sure fire work involved with drug trafficking. The descriptive display of stagnation from a perceived practice that garnishes a life of luxury is foretold by one of its participants, Curtis Snow. He tells the story of how is uncle would chop up cocaine in front of him the very same way he was chopping up cocaine in front of his two year old. He then shares that nothing has changed in his life but “the seat that he is in now.” That serves as powerful commentary of a young brother, that works hard at doing the wrong thing to no avail. He has seen the end of his rope but it saw lives cut short and his own freedom jeopardized.

My friend Allen so wisely critiques that this happens right in the vicinity of the Georgia Dome but no one appears to care. Proximity of crime and poverty appears so far away until it knocks on your doorstep. He laments, “Sadly, it is highly likely that none of these guys have ever been inside the Dome to even see a game even though they live so close.”