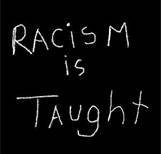 There is not a day that goes by that I do not think about racism. The inventiveness and genius of the system of racism is ever unfolding. It mutates and redevelops itself as people become more cognizant of its terror. Racism is one of the most complicated terrains I have ever had to navigate through in my life. It hurts and it frustrates in sacred places that society refuses to allow grief. Racism redefines love while reproducing hate. It dismantles any notion of reconciliation because it refuses to admit that there was a separation in the first place.

Racism has become so embedded in the fabric and essence of (a)merica that it now functions as patriotism.

Thus, objection to racist behavior makes one anti-(a)merican and a terrorist. The lived perception is that black people should consider it a privilege to be in (a)merica and willing to endure racism because of this privilege. It would make the presumption that the privilege of being in (a)merica outweighs any racism projected at black, brown and red people.

The beautiful ugly of racism is so manipulative that it fails to adjust its transformative lens, even when it encounters God. This produces a hermeneutic of oppression that discerns racism as media hype with blatant disregard for the “other.” This type of understanding of God soothes the soul of the racist rather than unhinging the lies that have prevailed in a colorblind and passive (a)merica.

A Christian that fails to interpret and oppose racism, in a society, can never be trusted to effectively transmit the Gospel to all.

“Dominant groups are always in danger of thinking that their perspective is synonymous with God’s perspective.”

This failure to critique and question one’s personal thinking stifles the opportunity to be sensitive to the needs of the other. In such a space, racism is acknowledged as adiaphora that is only significant to the black church as an illegitimate excuse to hate whiteness. Racism is a nonessential issue that brings division. Interestingly, in such spaces, racism appears to be the only thing that can be changed, transformed or resolved without any form of deliberation.

It is this type of privilege that embodies racism: this privilege to ignore the trauma that has become the aftermath. Racism provides the dominant culture with free passes to criticize without be criticized. It “thrives of colorblindness, while simultaneously engaging in highly racialized practices,” writes Drew Hart.

My good friend Martin Quick posed a question to me:

I know God does not get glory in racism from Christians, but…how do we respond to racism in a way in which God gets the glory?

I am not sure how to answer that question properly. The privilege that comes with racism presses the black, brown, and red people in (a)merica to be the ones that sacrifice the most. We are being asked to fix a broken system that will allow the people in power, to stay in power, but in some minimal space we obtain some level of equality. That is not justice but lunacy being ambushed by absurdity. I am left exploring that question but he answers with a quote from Dr. Dora Rudo Mbuwayesango:

Sometimes the call to and celebration of unity frightens me. I would rather have justice but maybe one leads to the other but I do not know…